“I am thrilled to be standing in May 2019 for election in an unexpected European election with a simply outstanding team of candidates, any of whom would make a wonderful Member of the European Parliament.

Fiona Radic stood for parliament in 2010 and celebrated a decade of campaigning with the Green Party by standing again in 2017’s snap election. She helped manage the successful Green Mayor Campaign in which Julie Howell kept her deposit, polling over 9% of first preference votes in Peterborough and proving strong core support in a city with strong environmental ambition. Julie Howell was subsequently elected to the city council in 2018 as Peterborough’s first Green city councillor.

Fiona campaigned to remain in the EU during the referendum and previously stood for election in East Region to the European Parliament in 2014.

“My family is international in its connections and outlook. The EU referendum was divisive and profoundly destructive. It caused alarm and dismay at a time of unprecedented international economic stress and political upheaval. I stand firmly with those whose rights and relationships – personal and business – are being overlooked by the state. People are not bargaining chips. It isn’t acceptable for politicians to play to the gallery by discarding peoples’ hard won rights. It is one thing for the state to assert its right to govern itself (even if that right was never endangered). It is entirely another to put our current economic system at risk, and to threaten family life. And not just family life. Businesses are also being rocked by incompetent and self interested styles of government. If we are to leave the EU, let us be sure to make that a sensible and constructive process and make full use of Green Party thinking on local decision making and empowerment. But I am now absolutely sure that the decision about leaving the EU was founded on shoddy information and that those in power will have to give voters a sensible and fully informed choice. Of course voters will be cross: they are entitled to be furious. But fake news, anger and fear are not sound bases for complicated and difficult decisions and those who whipped it up should be ashamed of themselves and I hope that in this extraordinary European election which nobody thought would happen, that voters will hold them accountable by casting their vote for the Green Party.”

Fiona has campaigned on the NHS, on transport, planning and infrastructure, on nuclear power and Trident, air quality, green spaces, social justice and equality, maternity services and housing. Fiona has worked in universities, in companies massive and tiny in the financial and telecoms sectors and also as an unpaid activist and volunteer.

I have asked people why the council hadn’t gone all out to fund a replacement bridge as soon as it realised Rhubarb Bridge was suffering an unusual degree of decay. This would have made sense, especially since there are national funding pots for sustainable travel infrastructure, and this bridge might well have qualified.

I wrote a post about the stakeholder event, at which my question did not receive an answer.

Since then I have I received one really useful reply. My interlocutor pointed out to me that the money for repairs and maintenance comes out of the Revenue pot at the council. Revenue is for running costs, costs which recur year after year. The money for the an surface roundabout or for a replacement bridge would come out of the Capital pot. Capital is for one off costs, for buying or building assets such as buildings and infrastructure.

This made me think. Pressure on the Revenue pot is extreme. And it might be this extreme funding pressure which is leading to a decision not to maintain. If it replaces an an annual maintenance bill with a one off capital bill (with arguably a smaller ongoing maintenance cost), it will be relieving pressure on the funds which are needed to look after people in extreme need.

Funding pressures on local government affect their Revenue funding primarily. Pressure on capital funding is not as bad. Revenue funds are used to fund social care, road repairs and waste disposal. It is this funding stream which is under impossible strains as central government imposes its Austerity measures and renders all our services less and less able to cope. So all local authorities have to balance roads and waste against social care. It is quite clearly insane, but until we sack the government as we are entitled to do at each general election, there is no sign of a change in this wicked situation. And local authority roads get a small fraction of the maintenance money which Highways England gets to maintain trunk roads. Unfortunately Rhubarb Bridge does not belong to Highways England. It belongs to the council.

This leaves a number of items which haven’t been accounted for: lets call them uncounted elephants in the room:

And it leaves my original question standing: why the council hasn’t tried to get hold of (let us add “capital”) funding to rebuild the bridge – if it is beyond economic repair? 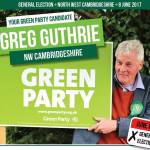 A “safe” seat presents a number of challenges to residents but also to opposition parties, one of which is that voters who know their vote “doesn’t count” (in terms of securing democratic representation) are inclined to think that their vote “isn’t counted” (but watch this video to see why this is an entirely different thing!).

Why it’s good to vote Green in NW Cambs from Julie Howell on Vimeo.

Please browse back a few posts to find more about tactical voting and seat marginality.