The concert will start at 1pm

But you can arrive early for a drink and a bite to eat. All refreshment profits go to The Green Backyard and the cafe is run by Green Backyard volunteers.

Flute Concert  at  1pm at St John The Baptist in Cathedral Square, Peterborough

This concert is the third in a summer concert series organised by St Johns CIC. Hannah Clark will be joined by Irena Radić. Both of these young musicians have given concerts at St John’s before. In their début appearance here together Hannah Clark (flute) and Irena Radić (piano) will play music by Fauré, Ravel, Reinecke, and more…

The church will be open from about midday and arriving early ensures time for a homemade cake or a coffee. All profits go to The Green Backyard.

The concert will begin promptly at 1pm. Admission is free, but those who are able to afford it are asked to make a donation. The suggested amount is £4.

You can also spend some time with the magnificent textile work, Mapestry, installed in St John’s as part of this year’s magnificent PECT Green Festival. Mapestry will be in the church for a short while, and then it will tour the route of the River Nene which passes through the city. The work consists of twelve delightfully characterful panels, each one describing a month in the year and a place on the Nene. The work has been created by Froglife a major wildlife charity based in Peterborough and a number of community crafters. Nenescape is a Heritage Lottery funded Landscape Partnership Scheme conserving and protecting the Nene Valley’s natural and built history. Get in touch with them if you think you can help. A woman in a red dress is walking her dog in Ferry Meadows: 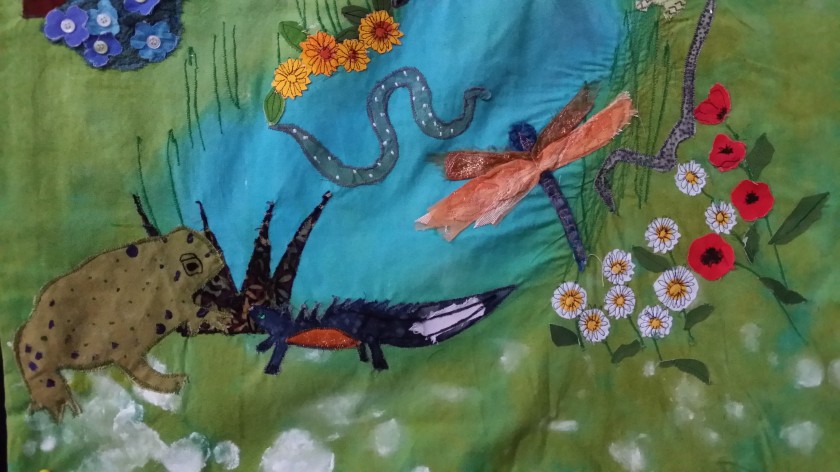 As part of my fundraising for Going to Mongolia I am hosting two events. The first is on the 4th of July at 19:30 and is a Piano Recital with Irena Radić who is currently studying at the Royal College of Music. Irena has won several awards: Peterborough Young Musician of the Year 2013; the Jaques Samuel Competition; Oundle young musician of the Year 2013; and the Teresa Carreno award. The program will include fun and exciting music by composers such as Bach Beethoven Debussy Faure and Scriabin. The concert venue is the St. John’s Church Cathedral Square, Peterborough and admission is free!

You can book at the following website or go by the short link: 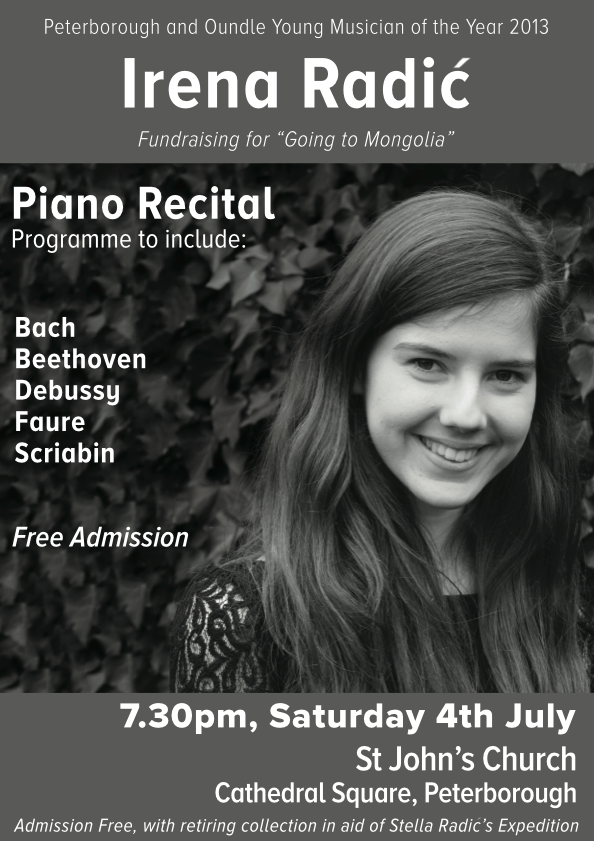 The concert will showcase the talents of outstanding young performers, including previous winners of Oundle Young Musician of Year, Pianist Irena Radic & Cellist Ellen Porter and Daniel Dixon, 2014 Oundle Young Singer. A string quartet and wind ensemble from Oundle School will join the line up.

The programme will include lots of treats, including Debussy’s Suite Bergamasque.

The concert will help to raise funds for the Mayor’s Charities: CHAT Youth Counselling and Volunteer Action.