The concert will start at 1pm

But you can arrive early for a drink and a bite to eat. All refreshment profits go to The Green Backyard and the cafe is run by Green Backyard volunteers.

Please help distribute leaflets if you can, maybe alongside some Green Party Greenviews? 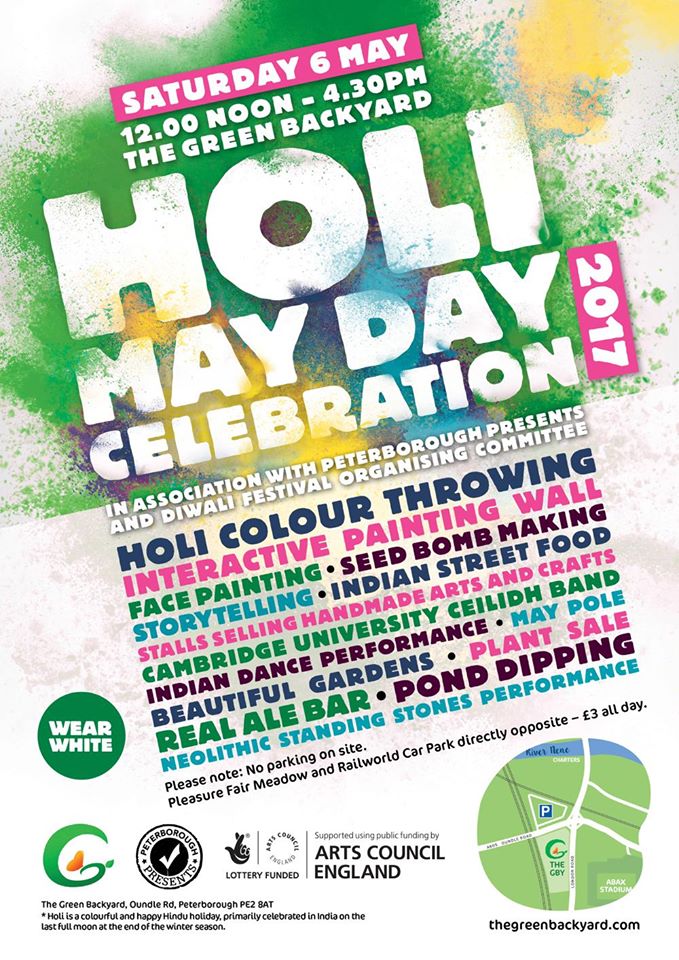 I write a week after polling day in order to thank you for your votes.

I can’t pretend I am not disappointed at coming last, but I am not surprised and I am happy to deprive the delightful Peter Slinger of last place!

I thought I’d share a couple of thoughts. The first is about “counting agents”. There was a recount for Fletton & Stanground called by UKIP, who were only three votes away from winning third place. The recount took ages: I think about an hour. It eventually identified one error which awarded the Labour candidate one extra vote, leaving the UKIP candidate in fourth place, this time with a four vote gap. The grass skirt method of counting votes can easily produce a discrepancy. The grass skirt is the name given to a set of overlapping ballot papers which are stuck down using a large piece of paper laid below them, with a sticky “waist band”. The result is a large array of sheets which look almost as if they have been pleated. It is the method used for counting votes for multiple vacancy elections. There are two obvious moments for error. The counter can get the row total wrong. Some were using rulers. Others weren’t. And there is a moment when the whole grass skirt is taken away to a pile on a table in the centre of the room for data input, creating room for data input errors which can’t be scrutinised. Putting sets of results into a laptop is not something which happens with the normal voting system: where votes for one candidate are put into that candidate’s box. In the single vacancy system the counting agent can literally check that the papers come out of the ballot box, that they haven’t gone astray (e.g. fallen off a table) and that they are placed in the right box. Counters are working in the middle of the night and performing a task which is unbelievably slow with a lot of waiting around. It is very very easy to slip up, but with counting agents watching and intervening if a mistake happens, the risks of accidental or even deliberate miscounting (which would be an electoral offence!) are minimised.

Another thought wasn’t mine: it was that of the winning candidate’s partner. She remarked to me that Fletton & Stanground ward “wasn’t Green” because “people didn’t visit the Green Backyard”. I didn’t respond to her there and then (I’m not very articulate on election night and I am still pretty exhausted as I write this) but I felt hers might be an all too perceptive comment. People do visit the Green Backyard: a lot of people visit it. But maybe not that many from the area of the Fletton & Stanground ward? The Green Backyard is very much within the “inner city”, but the outer edges of Stanground, way beyond the parkway, are very rural indeed: green in many other ways. Until this year The Green Backyard was in the old Fletton & Woodston ward and I would say that it has established very strong associations with that area, and also with the embankment and with the city centre: it has become part of the Peterborough tourist’s trail. It is perfectly possible that Stanground village and surrounding area are not as well connected to the Green Backyard which now lies on the furthest western edge of the new ward. The Green Backyard has immense potential to act as a ecological and green project incubator for the city as a whole.

In fact, one of the reasons why I stood in this ward, was that it and its immediate neighbours have been subject to the most extraordinary boundary changes and as someone who knows and is very fond of Fletton, I am frankly concerned that Fletton has been divided into three. Dividing places is one way of conquering them, or of diluting their character and individuality. I mentioned this at the Fletton & Stanground hustings during the election period and at that I raised the possibility of creating a parish council in Stanground and, perhaps another in Fletton. Someone in the audience shot this idea down and the conversation was over before it had properly begun. I didn’t quite catch what she said, but I think it was to the effect that Church Street would never talk to South Street. On reflection, she must have been joking: if I caught her remark correctly, these streets run into one another: they are the same street.

If anyone wants to continue this conversation about parishing the areas of Peterborough which currently don’t have parish councils, here, I’d be delighted. This is a very big project and even if we could find enough support and practical help to see it through, it could take years.

The crackle and static are not coming from the recording: they are coming from the council’s own sound system. I am particularly interested in what readers think of this system, which I am given to believe was installed by Serco.

Hats off to Chris York, championing transparency and political accountability.  I think it is a tribute to Peterborough’s politicians and politicians elsewhere too, not just the elected councillors that making recordings of debates like this has become possible. As far as I am aware it was always legal, but people have been being slung out of public galleries over the past couple of years for recording events.

Faced with so many challenges, eventually Westminster was forced to make a ruling and councils now have no choice but to give permission. This is the first council meeting I have attended where there was no prohibition notice on the seats in the “Spectators Gallery”.

This shows how some of the best interactions happen behind the scenes and outside the chamber.  And some require the sort of skills and technical know how which might not be present in the chamber itself.  Well done Chris York.

and go here for the campaign