RAMSEY FOODBANK SHOWS ME WHAT IT DOES

Last week I visited Cambridgeshire’s newest foodbank, which opened a year ago in Ramsey. This visit formed one of a number of visits to the region’s growing number of food banks by members of the European Green Team in the run up to the European elections on 22nd May.  Our team has reported on Hunger in the East.

The Ramsey foodbank is based at St Thomas a Becket on Ramsey High Street and it works as part of the network of Trussell Trust foodbanks which now serve no fewer than fourteen communities throughout Cambridgeshire.

“I arrived with me lots of grand ideas and optimism. Less than a week before my visit I had been at the opening of a new food cooperative in Peterborough which has huge ambitions to change the way we shop and eat in the city. I am talking to growers and makers and I am often around people who jar and pot things. 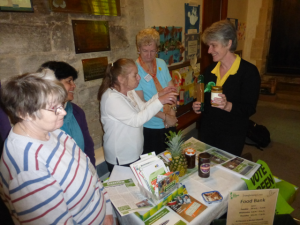 “When I arrived in Ramsey the market town sitting in an area of rich arable land was particularly green and beautiful, and lush with recent rain. The harsh realities of hunger in an area which is so very rich agriculturally brought me down to earth and made me think.”

WHY EMPTY KITCHEN CUPBOARDS IN RAMSEY?

Rev’d Gita Bond, who manages the Ramsey project explained that “The foodbank provides an emergency food supply for people without an income or on an income so low that they cannot afford food. Its clientele is identified by one of a dozen different agencies as in need of emergency food. They are issued with a voucher.” 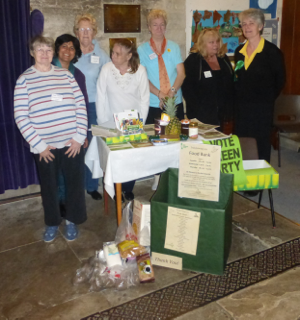 The food bank relies on ongoing donations from parishioners and residents and it is also on the lookout for people who can deliver donations to people who are not mobile or who live further away.

Gita didn’t need to explain about the tea and biscuit which awaits volunteers: a group of people were talking and organising all manner of things around a busy and welcoming table.  The church works with a wide range of community groups and there is a warm welcome for everybody.

The costs of living rise and people in work find their pay stands still and it is impossible to pay all the bills and put food on the table.  People earning poverty pay are a growing part of those turning to food banks for help.

People not in work for various reasons are more obviously vulnerable to hunger.  But they are also victims of ideologically motivated and regressive government decisions.

The Green Party disapproves very strongly of the Department of Work and Pensions’ “sanctions” regime, which literally removes the welfare safety net from vulnerable claimants. Although a sanction can later be removed, a hunger gap opens up immediately. If the person falling into that hunger gap is lucky, they might get help from the foodbank. 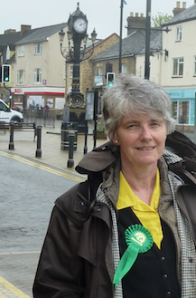 “Worries have recently been expressed to me that employees in the DWP may be being prevented by their line managers from identifying and referring people who need food immediately.”

“We need an immediate change in government policy. Policy has gone back to before the second world war: we had malnutrition then and it is shameful that it has come back.

“And on the ground, regardless of who gets elected on 22nd May, we need to figure out how we can improve our food resilience. 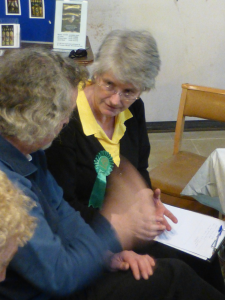 “I was both impressed and horrified. I could see that almost all the food in the store is processed and packaged and it needs to be like that in order to have a reasonably long shelf life. Consequently there is nothing fresh at all. If someone donates something with a source of protein in it, such as a tin of fish or meatballs it can be issued. But if what is received is nutritionally unbalanced or poor, or all if all the donations are pasta, then that is all the foodbank can issue.

“I suspect that what happens is that someone steps in: I bet it is someone with very limited means themselves, but it will be someone who cares. Communities work like this: but it is awful that they have to. But I am so very impressed with what they do manage to achieve despite the problems.

“What I simply don’t understand is why we accept this system. Isn’t it insane for a country as wealthy as ours to function in this miserable way? 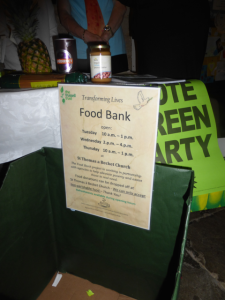 CALL TO RETAIL CHAINS TO HELP

The Green Party is urging retail chains with outlets in the Ramsey area to make small regular donations of suitable items. A list is available from the foodbank.

“But beyond these immediate calls for help, we are urging food processors to identify and minimise food waste. I sometimes hear about large amounts of perfectly edible food being dumped in Cambridgeshire: some of it destined for landfill (because it has been packaged and it is not worth unpacking it).  Some of it goes for composting.  In fact I heard a little while ago that on a farm close to Ramsey supermarket reject tomatoes were being composted.  They might be the wrong colour or shape.  This is not sustainable: this is not right.

“It is high time we got this edible fresh food quickly to people who want and need good quality local food. I am perfectly happy to go and talk to a producer or a shop myself about what goes wrong in our broken food systems and how we can work to tackle hunger.  I think the co-existence of food waste and hunger demonstrates that the food economy is not working efficiently.  This is not good for consumers, but it doesn’t do any good to local farmers or food producers either.

will MY PHOTO ID BE ACCEPTED?

Peterborough City CouncilMay 4, 2023
3 months to go.
REGISTER TO VOTE
WHich is my local authority?
Loading Comments...